What exactly is a folding recumbent bike? You’ve more than likely seen a recumbent bike if you’ve ever been to the park before but you’ve probably never heard of the name or would know what to look for if you wanted to buy one. You’d probably look up terms like “laying down bike” or “low ground bike” and other search terms of that nature. These things are highly practical in terms of comfort, style and health benefits but they’re not as popular because a lot of people don’t know about them. They’re also a hit among senior citizens due to the various health benefits.

What is A Recumbent Bike?

The word recumbent simply means that a person is laying down, usually it’s tilted backwards with their back towards a cushion. A ﻿﻿﻿recumbent bicycle﻿﻿﻿ is simply a bike that places a person in the laying down position with their back laying down on a seat and the bike functions like every other normal bike. There’s still pedals, there’s still a handlebar and usually its own kickstand as well to help it stand upright. However, there are also folding recumbent bikes that are hitting the market and making new waves.

Why Do People Get Recumbent Bikes?

Weight Distribution – On a recumbent bike, rather than putting all of the weight onto your tailbone or on your rear end, a recumbent bike helps distribute your weight evenly all over the bike. This will relieve a lot of pressure on your back, your tailbone and other muscles in the immediate area.

Comfort – Aside from having great weight distribution, people find recumbent bikes far more comfortable to ride on. If you’ve ever spent a couple of hours on a traditional bike seat, then you’ll know what I mean. Bike seats are usually uncomfortable and tough to make sure they’re durable to withstand impacts and longevity reasons. Recumbent bikes are built for comfort in mind with padded seats that you lean back in. The majority of the stress will be put on your legs as you pedal, depending on the amount of resistance.

Speed – Believe it or not, you can actually gain speed because of the design and tilt of the bike. While we don’t want to get into the physics of aerodynamics and the advantages of recumbent bikes give here, the world record for a bike in speed is actually held by a recumbent bike. Not a lot of people use them to race or for speed, most people use them for practical reasons and health related reasons but they can definitely move if you want them to.

Fun Fact: These bikes offered such an advantage to people who used them in racing, they were actually banned from racing per the Union Cycliste Internationale in 1934. Today, they have their own racing events.

Different Configurations – One of the final reasons a lot of people like recumbent bikes is because not a single one is like another. They’re all unique in their own way and you can configure them to your own liking.

One of the best things we liked about this recumbent bike was the seating. It takes up a bit more space than some of the other items on this list but this also makes room for more functionality, a larger screen and it’s pretty versatile. The display prompts sit at a comfortable level and isn’t too much of an eye strain. 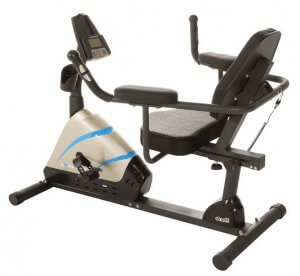 For hitting the open road and getting some fresh air, we have the Mobo Cruiser, which is a versatile adult themed recumbent bike. The steering system was exceptionally smooth and the seat while it’s a bit on the thin side is exceptionally comfortable. One of the best things that customers will love about the Mobo Triton Pro is that it’s made for just about any height. 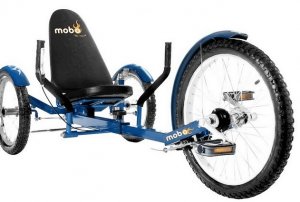 One of the most common complaints that we see about recumbent exercise bikes is that they don’t have foot straps built in. It’s annoying and usually accompanied by pain when your foot accidentally slips off of a pedal and hits something else. This bike from Marcy comes with its own foot straps and they’re adjustable as well. It’s slightly on the heavy side but it doesn’t take up much space at all. 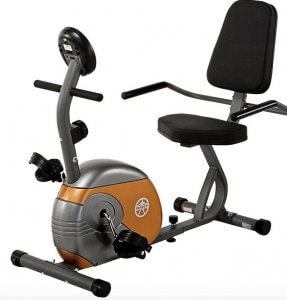 What Kind of Recumbent Bikes Are There?

You’d actually be surprised at all the different kinds of recumbent bikes out there. There’s more so than the traditional folding bikes and exercise folding bikes.

Mountain Bikes – Simply put, mountain bikes were designed to withstand mountainous terrain or rugged areas. These bikes were built for extreme sport racing, tough hills and rocky roads. If you’ve ever wanted to get into off-road biking, this is what recumbent mountain bikes were made for. Just be warned that mountain bikes in general, regardless of the type of folding bike costs a bit more. This is partly due to the heavier materials needed to make mountain bikes as durable as they are.

Low Racer – When you see one of those recumbent bikes that sit really low to the ground and the seating seems to be right in line with the handlebars, that’s what a low racing folding recumbent bike is. They were designed for racing in mind and are very popular in populist areas of Europe. Their wheels are usually only 20 inches in the front and usually are accompanied with a 26 inch wheel in the back or vice versa. Due to the position of the wheels, the seating and the handlebars, these bikes are the quickest folding recumbent bikes on the market today.

High Racer – Like the low racer, these bikes were designed for speed but there’s two main major differences here. First, there’s the wheels which are larger and then there’s the seating which doesn’t sit directly in front of the handlebar. What these bikes do handle better than the low racers is maneuvering obstacles and turning. This is because they’re slower at lower capacity speeds and this allows the user to turn the bike easier. One of the downfalls to high racers is that it’s not uncommon to hear of hip and elbow injuries from them because of how the seating position is.

Crank Forward – In these particular type of bikes, the aerodynamics advantage of speed is usually sacrifices so that the leaning position can be adjusted at will. With these bikes, you can switch back and forth between an upright position and a semi-recumbent (which is more commonly known as a crank forward in the cycling community). They don’t necessarily have an advantage over other types of folding recumbent bikes but some people seem to like them.

Tandem – Believe it or not, there’s actually tandem recumbent bikes out there. A tandem bike is simply a bike that has more than one seat and some couples find it to be a relaxing therapy to bike with your significant other. Some may not like the idea and do it for their partner but a tandem recumbent bike can be a little costly. They’re not exactly popular and not a lot of manufacturers make them for this reason. Instead of the traditional hard seating, you get the laid back seat that’s usually featured on a low ride recumbent bike.

Tricycles – They’re more commonly known as trikes and are the least popular option among folding recumbent bike owners. They’re not very practical and some of them are very hard to fold. They’re also difficult to find as well, because manufacturers don’t spend a lot of time producing them due to their low demand. The only difference is, they have three wheels instead of two which produces their own set of advantages and disadvantages.

Custom Made – Like every other style of transportation, you can have a completely custom made recumbent bike, some that are foldable and some that are not. There’s custom manufacturers out there who have taken the time to make vehicle like covers to make it feel like you’re in an actual car or drag racing vehicle. These obviously won’t be foldable but some of them do break down into smaller parts to help make storage easier. These are very costly and only recommended to people who are extreme hobbyists of recumbent bikes. There are limitless possibilities if you’re looking to get a custom made recumbent bike, but be willing to fork up a lot of cash.

Benefits of using a Recumbent Bike

Why should you get a folding recumbent bike and is it worth it? What are the main reasons to get one and what kind of health benefits do they offer?

Recumbent bikes are great for exercise, older people and your overall level of comfort. They’re extremely quick but they aren’t the best for ﻿building cardio and muscle stre﻿ngth. So, if you’re looking for comfort and back support, we definitely recommend a folding recumbent bike.

Recumbent bikes are a great exercise tool to have in your arsenal, whether you’re targeting weight loss, heart health or just generally enjoy riding on a recumbent bike. The price of recumbent bikes is generally more expensive than other types of bikes out there because the manufacturing process to create them is completely different than your traditional style of bikes. They’re a lot of fun and well worth the cost. We recommend going with something for outdoors if you live in an area that permits it as it’s great to get outdoors and take the bike out on a bike path.