Another great product from Columba comes in at one of our top and a pretty decently budget friendly bike. Whenever you see a Columba themed folding bike, you can rest assured that not only is the frame built with authentic quality in mind but that the overall quality of the bike is high value. The wheels on this bike come in at a staggering 26 inches and this bike was built for overall performance in mind. Much like the blue counterpart, the design isn’t really too much to look at but it makes up for any lack of design in their overall quality.

We really appreciate the kick stand that’s included with the bike that was actually a very hard based steel and this is important for a couple of reasons. A lot of people underestimate the power of a steel based kick stand. The kick stand holds the weight of the bike and makes sure that it doesn’t come tumbling over when it’s resting on a hill, so it’s important to make sure the stand is high quality. The seat while it looks a bit rugged, is actually rather comfortable and the entire steam is easily removable if you ever need to do so. 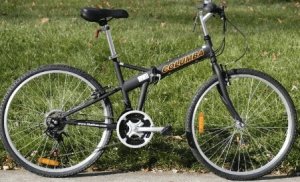 The overall design of most Columba bikes doesn’t speak volumes but the majority of their handy work is rather in their overall performance of the bikes. When we look at the design of this particular bike, the Columba 18 speed Shimano black bike, we see a lot of similarities to other Columba themed folding bikes. It has the same style of framework, which is short, stubby and sturdy. The framework for Columba themed bikes is usually short because they believe they can build more durable and thicker frames as long as they’re short.

The overall comfort of the bike is rather comfortable. When you sit on the seat, it may not feel like you’re sitting on a cloud but it does feel like you’re sitting on something you could easily ride around on without the irritation and annoyances of the traditional bike seats. Also, the pedaling action is rather smooth and won’t interrupt your comfort level at all, which is something that’s hard to find in a lot of different folding bikes. The wheel quality of the bike also adds to the comfort of the bike because they may be thin but they’re rugged and durable.

Selecting a Columba bike over some others should be a no brainer depending on what you’re looking for. Sure, this bike isn’t going to fare well on the mountains or on very harsh terrain but this bike is extremely fast. If you’re looking for speed, then look no further than the Columba 18 speed Shimano bike. It can ramp up extremely quick so don’t use the higher speed settings if you’re not athletic and if you’re not ready to go extremely fast. It’s nice that it has more visible reflectors than some of the other Columba bikes out there on the market which makes it easy to see night riders.

The wheels are relatively thin for a bike with 18 speeds which makes it nice for acceleration on this particular bike. These types of bikes weren’t built for racing per se but they were built with speed in mind and the pedal action of the bike seems rather flawless. When you’re pedaling, you don’t really feel the resistance that you should and that you do in other types of folding bikes. The Columba line up of bikes feels solid and smooth when it comes to pedaling, which is why we give them so much credit when it comes to performance.

Features of the Columba Folding bike

Wheel Size – With 26 inch wheels, this monstrous folding bike can accelerate or slow down as quick or as slow as you want it to. It’s not uncommon for folding bike producers today to include either 20 inch or 26 inch wheels because this seems to be the standard size. These size wheels allow for not only performance but safety and precision. 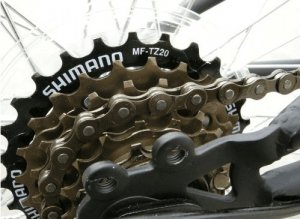 Tires – The tires were made by Kenda which includes 26 inch tires. Sure, they probably won’t do very well in the mountains or on off-roading adventures but these tires are premium quality and they were made to last, so you won’t ever have to worry about replacing new tires, at least for a very long time.

Kick Stand – One of the most impressive and underrated features is the steel kick stand which can withstand an enormous amount of pressure. With the overall weight of the frame, this stand was made with durability in mind and works well on hills as well, which is something that a lot of other bikes lack in.

Q: If I want to change or remove the handlebars, do they come off at all?

A: Yes they do. The handlebars come off in an easy motion and can be re-attached just as easily as well, so if you for whatever reason want to switch out or repair the handlebars, no need to worry about that.

Q: How fast can this bike go?

A: There’s no exact measurement as this isn’t exactly a bike built for racing but there’s people who have recorded themselves going at 25 mph at the top gear level.

Columba is one of our favorites because they put a lot of consideration into the quality of a lot of different elements on all their bikes. One thing we appreciate is their braking system which isn’t great for just safety but performance as well. Columba is notorious for having a solid braking system and while the design may not look like much when you first view the bike, rest assured you’re getting a high quality performance bike with 18 speeds of power.