Fuji is a well-known brand since many years and has an irony attached to its fuji folding bike. One of its top selling folding bikes includes the Fuji Marlboro Folding Bike and undoubtedly it is a great model for the cycling enthusiasts. Fuji made this bike for a Marlboro cigarette promotional campaign back in 1996 and was a limited edition of the mountain bike. The campaign was named as Marlboro Unlimited and the word Unlimited was featured on the headbadge of this folding bike.

Fuji Folding Bike | Have a Look

However, that bike turned into a non-Marlboro version and now commonly known as the Fuji Folder bike, but I’ll be using the term “Fuji Marlboro folding bike” throughout our conversation.

Below I have shared a quick review of the Fuji folding bike, Marlboro going through its features in detail.

The fuji folding bike Marlboro  is actually a mountain bike with a great performance and maneuverability. It has a nice and sleek body that looks very professional. There is a gear shifter and Shimano speed system installed that gives you a thrilling experience during your rides. Being a mountain bike makes it capable of riding on bumpy terrains as well.

As mentioned earlier, the design of Fuji Marlboro folding bike is exceptional and perfect. It has a solid steel frame construction with a professional hue that gives it an elegant touch. Its tires are thick and gives you a great grip when riding on the road or going up or down the hill. 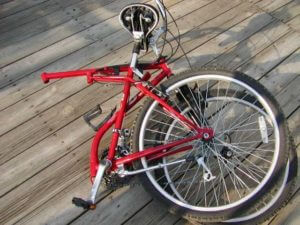 If you’ve never ridden a mountain bike before you’ll have a great experience and feeling. It is unique and exhilarating as well. Its compact geometry gives you a huge benefit. The bike is comfortable with a sensitive handling and folds within a few seconds. This saves your time! Although it is a mountain bike with pretty much large wheels, still it is light in weight. You can easily carry it under the subways or fold it in the rear storage area of the car and take it along with your journey.

It has the Shimano 6 Speed feature that gives you a thrilling experience with your Fuji Marlboro folding bike. You can change gears from the smooth gear shifter and ride the bike at an optimum speed.

Although when folded the bike seems bulkier but overall it is a great mountain bike that can go on the toughest terrains easily. You can ride it for commute or for leisure purpose. Its red color looks great and is surely going to give you a thrilling experience of riding the Fuji Marlboro folding bike.