Schwinn Aluminum Bike is a product of the Schwinn Bicycle Company which was founded by a German mechanical engineer named Ignaz Schwinn in Chicago back in 1895. It is known as one of the most dominant and best manufacturers of American Bicycles of the 20th century.

Some of the top selling models of Schwinn bicycles include the Schwinn Aluminum bikes. Here are 3 of the best models worth considering in 2016. 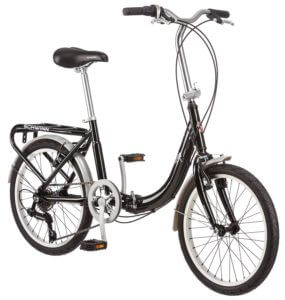 [yasr_overall_rating]The Schwinn Loop 7-Speed Folding Bike is a very popular bike by Schwinn and is considered as a revolutionary fitness equipment. It provides a great quality and value for the money paid for and gives you the freedom of pedaling through any terrain you want. It has a low profile frame with some great features and impressive specifications. Those with a tight budget and still need a functional folding bike, the Schwinn Loop 7-Speed Folding Bike is no exception. Here are some of its incredible features at such an affordable price.

The Schwinn Loop 7-Speed Folding Bike features an alloy aluminum frame that makes it a lightweight equipment. It is a sturdy frame that offers maximum stability and runs smoothly on the flat city roads and can tackle the uphill rides as well. The frame being aluminum is rust free but not rust resistance. You must keep a time to time maintenance of your bike to keep it in good condition.

The Schwinn Loop 7-Speed Folding Bike comes with 7 Gear mechanism that gives you the freedom of pedaling that bike at your optimum speed. You can keep the gears soft to go smoothly on uphill roads or keep them hard for a thrilling experience on a smooth city road. Its gear changing derailleur is very smooth and changes with ease.

Its brakes are responsive and trustworthy. They perfectly complement your bike when going down the slopes. The test ride was done and the bike was pedaled at 20 miles. The brakes brought it to equilibrium instantly and 100% safely.

The Schwinn Loop 7-Speed Folding Bike hardly takes less than 20 seconds to fold and unfold. This saves your time. Also, the low stand over frame doesn’t fall apart when folded. You can easily fold it and go under the subways, lift it to the car’s trunk or hop on bus and travel to your destination.

There is a built-in carrier that allows transporting more stuff like grocery or a small bag. The seat is slightly adjustable, however; a few users say that it is a bit uncomfortable. Perhaps the padding was less and riding for too long may hurt your buttocks.

Check out its price and more details on Amazon. 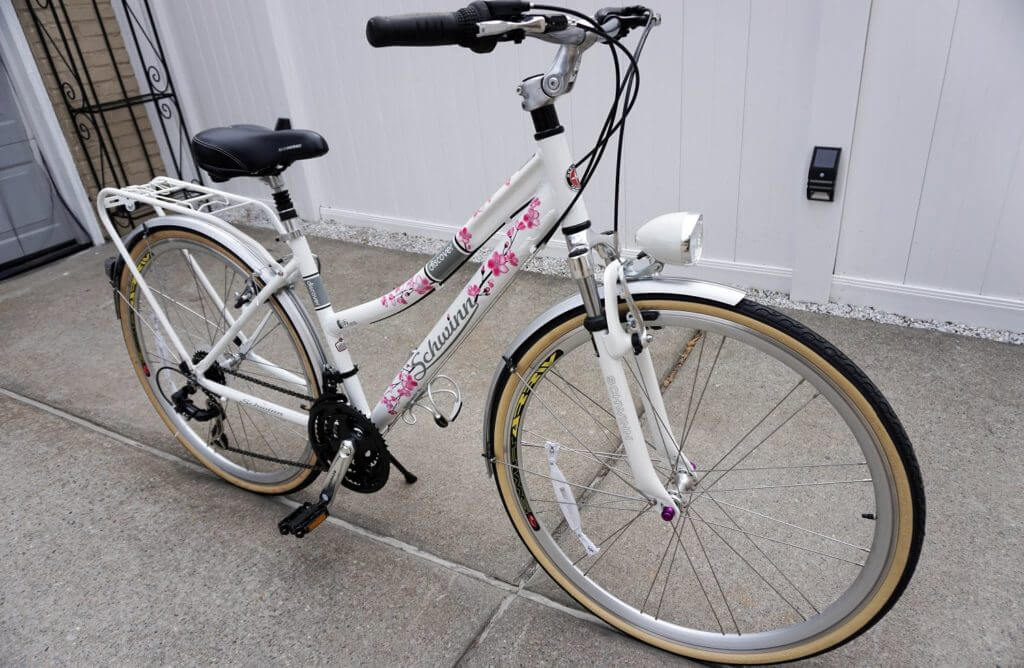 When it comes to choosing something for your well-being, the Schwinn Discover Women’s Hybrid Bike is one of the best equipment to choose. It is one of the top selling Schwinn bikes with an aluminum frame that is lightweight and comfortable for women. Its grip shifters give a fast, and smooth ride is giving you a wonderful experience. You will be amazed at its performance and style. It gives you 21-Speed options with SRAM grip shifters and an SR Suntour suspension that gives a comfortable ride and absorbs the shocks. Overall it has an excellent performance with a great maneuverability. 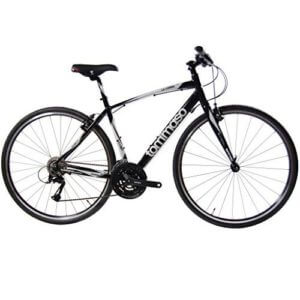 Its lightweight aluminum frame is durable and tough. It offers a fast acceleration with minimum efforts. The hybrid comfort frame design also gives you a comfortable riding position for shorter and longer distances.

Not to mention that the Schwinn Discover Women’s Hybrid Bike boasts 700c smooth tires that roll faster than a road bike and provides a hassle free and smooth riding experience like never before.

This suspension adds more to the overall stability of the bike and gives you maximum control over the obstacles. They absorb the shocks and vibrations and give you a comfortable ride. Whether it be a smooth and paved road or a bumpy one, you’ll enjoy riding the Schwinn Discover Women’s Hybrid Bike.

Its generous gear range of 21 speeds with SRAM shifters are ready to help you climb the hill with ease. You can pedal it softly or at hard gears simply by using the smooth gear shifter. The bike is guaranteed to perform at its best for you.

Its alloy brakes are trusty and responsive. This gives you more control and stability while riding your bike at speed.

The Schwinn Discover Women’s Hybrid Bike is simply the best and an affordable solution for women. I highly recommend choosing this model. It will surely be a great experience for you. Check out its price and more details on Amazon. 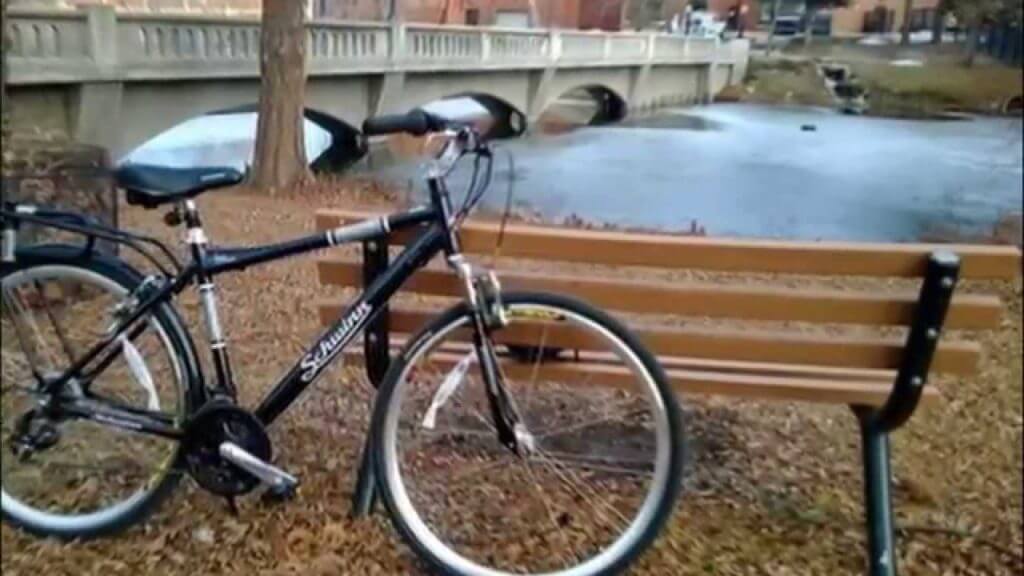 The Schwinn Discover Men’s Hybrid Bike gives you a great riding experience both on-road and off-road. You can ride it to explore the city or use it for the commute to reach your working place. While not as strong as a mountain bike, still it can cope the rough trails and perform better than most of the road bikes in the market. Because of its smooth operation, you won’t get exhausted while riding it. The swept back upright handlebar, and the padded saddle adds a lot to its ergonomic structure. The aluminum frame makes it light in weight, durable, and tough and gives more stability.

The bike is simply perfect for you with its great combination of features, quality, and affordability. It will be hard for you to refuse the 700cc Schwinn Discover Hybrid Bike. Its solid and responsive suspensions absorb the shocks on the bumpy terrains and prevent you from losing the stability. The seat post is easily adjustable to your desired height. In this way, you can comfortably ride the bike for shorter and extended distances.

Best of all the bike is safe from every perspective. It has linear pull brakes made of Promax alloy that is responsive and trusty. It comes with a Shimano rear derailleur, grip shifters going 21-Speed SRAM, SR Suntour crank and suspension fork and has imported parts fixed inside.

Overall, the Schwinn Discover Men’s Hybrid Bike is a high performing bike for you that you can trust and invest in. Check out its price and more details on Amazon.

Nowadays, it is a sub-brand of the Pacific Cycle after it got bankrupted in 1992 and was owned by a multi-national conglomerate, Dorel Industries. Ignaz Schwinn was born in Hardheim, Baden, Germany in 1860. He worked on two-wheeled ancestors of the modern high-tech bicycles we have today and mainly appeared in the 19th century.

Schwinn then immigrated to the United States in 1891 and 1895 he along with the financial backing fellow German American Adolph Fredrick William Arnold who was a meat packer founded Arnold, Schwinn & Company.

This company coincided with the craze of the bicycle in America. Chicago soon became the center of American bicycle industry and had thirty factories manufacturing thousands of bikes daily. Gradually the output of bicycles in the United States boomed to over 1 million units per years with the turn of 20th century.

However, this boom was short lived as it saturated the market years before motor vehicles became common. By 1905, the annual sales of bicycles dropped to 25% of what they were in 1900. The main reason was the competition that continued to become intense day by day.

Ignaz Schwinn realized that he need to grow his company. Given this, he bought several small bicycle firms and also build up a modern factory on the West side of Chicago for manufacturing bicycles in mass and at a lower cost than before. Schwinn also purchased Excelsior Motorcycle Company in 1912 and in 1917 added Henderson Company to form Excelsior Henderson.

However, the company went through a depression period as well in 1920 when the stock market crashed badly that gave a huge brake to American Motorcycle Industry and Excelsior. With the start of 1976, Schwinn Company was on the verge of its Bankruptcy as there were no buyers.

But after being owned by a multi-national conglomerate, Dorel Industries, the company began to grow again and started manufacturing some great bicycles including the foldable models with the latest designs and technologies.