Nowadays it is a common dilemma that those with relatively small spaces and having a great taste for cycling wonder how they can store that bulky equipment. Also, carrying a standard sized bike seems like hectic tasks and even awkward on public transport. The only solution available is carrying the smallest folding bike and not to mention that nowadays we have tons of brands offering some of the smartest and latest folding bikes with some impressive features and functions.

Although most of the smallest folding bikes have smaller wheels that might be a drawback over the conventional bikes overall, they are the leading market takers.

So, in this guide, I have shared five smallest folding bikes you won’t believe exist in this world. I have shared a quick overview of their past and how they came into existence.

Even if you have owned a folding bike before, you’ll still be surprised with the size of these bikes. It’s just like carrying your folding bike like a folded umbrella in hand. Sit back and enjoy the discussion! 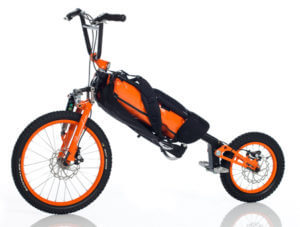 [yasr_overall_rating]While hiking folding bikes are now common but still have a fantasy of their own. If you are planning to hike up the mountain and don’t want to leave the biking enthusiast back, you can carry a hiking folding bike on your shoulders like a sleeping bag and continue your journey. While the bike is not that much small as it may seem, the only difference is that of the folding mechanism that makes it capable of carrying it on the back and hike your way up the mountain.

What’s unique about hiking folding bikes is that they have one wheel smaller than the other one as seen in the image. In this way, you can easily carry it. Normally they come with proper shoulders straps that give you the convenience of easily wearing the bike on your shoulders. Although such small bikes are a bit expensive worth your investment, especially if you are a cycling enthusiast.

It has the capabilities of riding on smooth country roads and withstanding the bumpy terrains of the mountain with ease. The frame is usually made of aluminum to make the bike lightweight and easier to carry on your hiking journey. 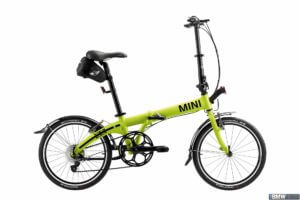 [yasr_overall_rating]This was a unique concept and was mainly inspired from the kids’ toy scooter. While it may seem like a very fragile bike model but is a durable one and can withstand the weight of a grown up individual with ease. It folds up so compact that you can pack it with inside your clothes bag as well.

A major drawback it has is that you can only pedal it on smooth terrains. The wheels are too small to withstand the bumpy terrains or go uphill. The seat and handlebar were made adjustable. It can be a great gift for your grandchild on his birthday as it would be a whole new concept for him. 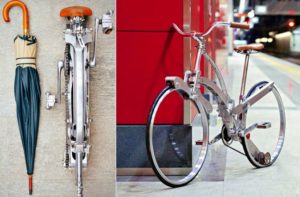 [yasr_overall_rating]As mentioned earlier that you’ll be surprised with the type of bikes in this discussion. Thanks to the brilliant minds of the manufacturers who made portability of these bikes so easy and unreal. The inventor was Gianluca Sada who said that he came up with this idea when he was disappointed with the design of the current folding bikes. He said because the main purpose was to reduce the weight and dimensions of the bike, this led his mind to this amazing thought provoking idea, and he had a successful run with it.

The whole frame is made of steel, and the wheels are so designed that when folded they contour to the shape of an umbrella as you can see from the image above. This frame can be of aluminum or steel and depends on the manufacturers.

The wheels size was kept 26” which makes the bike able to travel on the smooth roads as well as uphill rides as well. Plus the idea of pedaling is also unique. 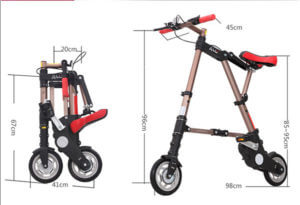 [yasr_overall_rating]You won’t believe, but this bike exists. It might be a smallest existing bike in the world and has a pedal powered transportation. The concept was officially featured on Yanko Design by Weiche Wu & Minhan Lin and gained a lot of fame.

The bike is hardly 8 inches when folded. There is a back wheel, and the seat is adjustable to any height you desire and the handlebars as well. A small flaw the design may have is the back wheel that isn’t too big and doesn’t extend out from the metal. This means you shouldn’t be overweight, and secondly, you’ll have troubles when going over the bumps as it may damage the bike potentially. Plus a lot of people commented that its design looks pretty slick, and designers could have made it better along with crafting its compact size.

Overall the bike is easy to ride and is commonly bought among the audience that is smaller individuals or kids. However, if the company could make some major changes in it, I’m pretty much confident that the design can capture a huge market shortly in all age groups. 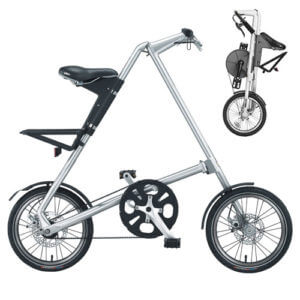 [yasr_overall_rating]Has an A-Shaped profile, thus named as the A-Bike. The bike was mainly designed with the intent of making it lighter and compact as compared to other folding bikes so that it can change the perception of people as to how they see bikes.

Overall it has a smart design and ergonomics and could be moved around like a stroller in hand. Once again the major flaw is the wheel size that rides very smooth and well on the flat country roads, but can’t withstand the bumpy terrains. It has an adjustable seat and handlebar so that taller and shorter individuals can assemble it as per their needs. Also, there is a small area where you can attach a water bottle along your ride and quench your thirst with it. Most of the users say that the bikes was a great ideal, durable and offer the ease of use.

The design is outstanding and fulfills what it guarantees. It is simply a brilliant idea to go with. Of course, you are limited to a smooth terrain only, but you can always use it for a fixed commute route and enjoy your journey the way you want.

While going through the list, I found the A-Bike Electric Folding Bike as one of the best on the list. So, I decided to go through a quick review of the bike discussing some of its core features in detail. 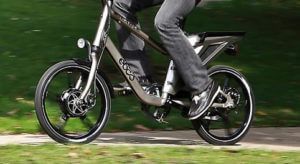 [yasr_overall_rating]The manufacturers of the A-Bike claim it to be one of the smallest and lightest folding bikes in the world. While the bike itself has a pretty strange look, however; it has been said that a group of UK-based entrepreneurs is now working with the hopes of claiming it as the world of e-bikes with A-Bike Electric.

I’m personally a mixed mode sort of guy and have a great taste for the smallest folding bike around. I keep on buying new ones and testing them out. This gives me satisfaction to live an easy and healthy life. Folding bikes are in fact an essential part of my life now. The main reason that impressed me a lot was the light and compact profile of these portable bikes. While I’m not that much limited on space but still I benefit a lot from folding bikes.

A major reason that attracted me towards these smart equipment was that most of them hardly take 15-30 seconds to fold, and this saves a lot of time. Also having an average size bag with me, I even store them inside them, hang the bag around my shoulders and comfortable carry them wherever I want to.

What wasn’t easier for me in the beginning that there were too many brands on the list and finding a good one was not an easier task? However, I managed to cop through the tough times of researching and going through the features of individual bikes.

Anyhow, during the past 3-4 years I seem to have devoted a major time of my life in discovering and researching more about folding bikes and to be honest it was like a fantasy for me. I dwelled in the world of these unique riding equipment and began to explore them more and more.

Whenever I had ordered a new bike, I was like a kid who can’t wait to ride and test it. However, during the past six months, I have been doing research on some of the smallest folding bikes around the globe and was quite amazed to come up with five popular models.

In the beginning, it was not easy to believe how the manufacturers have managed to craft out such designs. The whole research period was amazing, interesting and full of fun for me.

The bike features a removable 24-volt 5.8 Ah Lithium battery with a brushless front hub motor. There is a switch that could be turned on and off for electric assist or pure manual modes with no throttle mode.

While the bike is small, still it can reach a velocity of p to 12.5 mph or 20 km/h when its electric assist is activated. The maximum range tested by the company was about 15 miles/ 25km. You can recharge the battery via a USB that hardly requires 2.5 hours to charge it fully from empty.

When the company tested, it only took 10 seconds for the bike to fold and the same time duration for unfolding it. The folded dimensions were 21 x 40 x70cm and thus known to be the world’s smallest and compact e-bike ever. Most of the users say that once used to; it takes 5-8 seconds to fold it.

While it is the world’s smallest e-bike, still it weighs 11.8 KG. The company said that we were expecting to keep it below 10KG. However, the battery and motor added a bit of weight. Still, it is way too less as compared to other folding bikes on the market.

As mentioned earlier, this seemed to be a drawback as you are restricted to ride on smooth terrains only. Potholes are major problems as the wheels are likely to be swallowed by them. However, the company did mention that even a full sized bike wheels also experience similar problems. However, a great advantage of smaller wheels here is that you get to speed quicker.

Its two chain reduction system allowed the users to pedal it at the same rate as a regular folding bike. This means that pedaling at the same RPM won’t be frustrating for you.

Undoubtedly, the A-Bike Electric Folding Bike is one of the compact and lightest electric bikes in the world. It has a very simple folding mechanism that takes a few seconds to transform your journey. It telescopic design gives you the freedom to fold it into any journey you want. With electric power assistance, it makes your journey comfortable and easier and can take you up to 15 miles at full speed.

The A-Bike Electric Folding Bike is perfect for those who want more freedom and fun on their daily journeys. Of course, you can’t ride it on bumpy terrains or mountains, but surely it will be a great companion on smooth country roads. 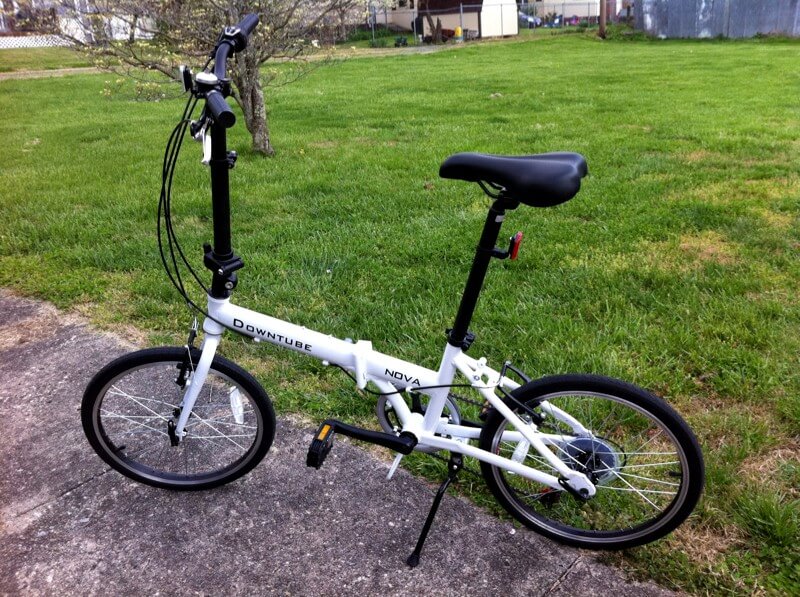