If you’re not familiar with the name Vilano, don’t be alone because it’s not a particularly huge brand name in the folding bike industry. However, with the few products that we have examined from them, we can say they do pride themselves delivering outstanding products. One of the things we’ve noticed as a trend in the Vilano﻿﻿ lineup is that they don’t offer particularly unique designs in terms of style but they do offer very durable and rugged frameworks for all of their folding bikes. This is a single speed folding bike that’s perfect for the inner-city commuter.

It doesn’t come too heavily on the features as it’s pretty simplistic in nature but it’s very well crafted an d the price isn’t too bad at all. One thing that we would recommend before purchasing this bike is to make sure that your riding area has a lot of flat areas because that’s where this bike excels. We’re not sure how well this bike would work in areas that aren’t flat and not just because of the single speed, but because the framework of this bike wasn’t exactly built to endure the rough hills or really hills at all. 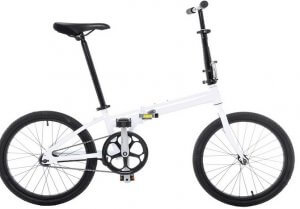 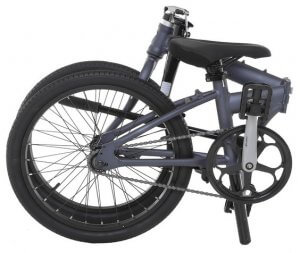 When we first glanced at this bike, the design was pretty straight forward and there wasn’t anything too particularly special about it. However, upon further inspection, we’ve noticed that it may be plain but there are little intricate details in the design of this bike that make it unique, in a certain Vilano way. First, there’s the frame connecting to the wheels. Usually, these frames are relatively thin but they stand out on a Vilano bike. Also, the chain is relatively clean and doesn’t take up a lot of space as it does in some other featured bikes.

Comfort of the bike is relatively smooth and the seat has a really nice cushion as well. You can adjust the seat to whatever height you want, whether that be low or high but we were overall impressed with the quality of the seating condition. The seat is designed like a traditional bike seat but when sitting on it, you immediately notice a difference. It’s not nearly as hard as a traditional bike seat and you can sit on it for hours without getting any kind of rear end burn, which is why this bike made this list. The handlebars are easy to navigate at any adjustable height as well.

This bike offers a lot of simplistic features but in our opinion does it better than other bike manufacturers who offer the same features. First, there’s the pricing point which you should always take into consideration. We feel that the pricing of this bike is relatively low compared to other bikes on the market that offer the exact same functionality but charge you more money for it. Vilano doesn’t usually charge much and doesn’t sacrifice quality to help you save a buck.

We also highly recommend this folding bike over other folding bikes for commuter areas, where the ground is usually flat. This bike is great for mobility while you’re zipping through the bustling streets and sidewalks of your city. It has great mobility in terms of steering and being able to turn at an instant and it comes equipped with high quality tires as well. One of the great things about this bike is just how lightweight it is, coming in at only 21.5 pounds, so it’s very easy to carry around from place to place.

Spacing – One of the premier features as advertised by Vilano is that this is a bike made for people who lack the space capacity to store any other kind of bike. This bike measures in at only 12 inches by 32 inches by 25 inches when it’s completely folded up, making it a highly convenient bike for storing and carrying around.

Budget Friendly – Vilano bikes are usually made with a friendly budget in mind and this folding bike is no exception. While the overall quality of the bike might excel, Vilano realized that they wanted people of all different economic standards and budgets to be able to experience it.

Accessories – There’s room for different kinds of accessories on the bike as attachments. For example, there’s room on the back for a rack if you’d like to store things, carry things or transports things from place to place while you’re out and about on your bike.

Simple Assembly – There is some assembly required but the assembly is rather simple and is detailed in an instruction manual that comes with the bike. All you have to do is simply attach the handlebars, then attach the saddle or seat post as more people commonly refer to it, install the pedals, make sure the wheels are on correctly and then make sure to tune the brakes and you’re good to go.

Single Speed – A single speed setting is built for inner-city cruising and allows you to have a smooth ride while you’re commuting to work. While a single speed may not be appealing to people who want to gain speed and take on a racing kind of folding bike, it’s perfect for people who want to casually ride or use something that gets them to and from work.

Q: What kind of sizes is this bike for? Can this bike fit someone who is 6’3 or taller?

A: While this bike does fit a wide variety of sizes, people who are over 6’ might have some slight trouble finding comfort in this folding bike. It does offer a little bit of adjustment but it’s not as adjustable as other bikes on our list.

Q: Can the pedals be folded up?

A: Yes, the pedals can be folded up if you’d like to fold them up. While this isn’t a common request and not a lot of people do it, some of the heavier or taller riders finds that it’s easy to fold the pedals up for riding.

While Vilano is a new company and isn’t a big player in the market, we feel that we should give them a chance because their products so far have come out to be high quality and this one is no exception. This may only be a single speed but don’t underestimate the power that it packs inside that single speed because it definitely has some zoom to it. The folding dimensions are great and it’s a nice versatile bike that will accommodate anyone looking for a commute bike in the city perfectly. 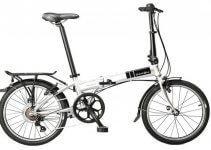 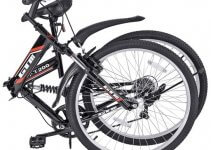 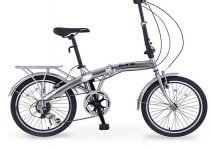